What Causes Foundations to Move?

Have you ever wondered what causes a home’s foundation to move? ULB Dry Waterproofing, one of Chicagoland’s most experienced basement waterproofing and foundation repair companies, has some insights for you.

This is probably the most obvious reason why foundations will move. When laying foundations, the way it’s laid and the ground 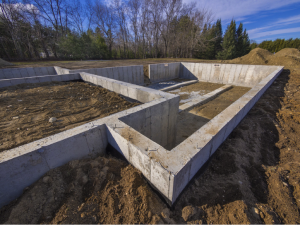 it’s laid upon are the two most critical factors. Regarding the ground, the soil must be prepared correctly. If the contractor didn’t backfill correctly, compact sufficiently, or used shoddy materials, foundations are more likely to move. Similarly, if the foundations themselves were constructed from subpar building materials, movement is more likely.

Living an area like Chicagoland, where the weather frequently changes, means the soil beneath a home is constantly changing. When it rains, floods, or snows, the soil can become oversaturated with water. This puts undue pressure on the foundations, which could cause shifting, cracking, and leaking. If while the soil is oversaturated the weather suddenly turns cold, the water will freeze and naturally expand, pushing the foundations upward. And in hot weather, soil that’s too dry will do the opposite and contract, undermining the support beneath the foundations.

There are several things that can contribute to poor drainage around a home: blocked gutters, downspouts not positioned far enough away from the home, standing water, and most critically, negative slopes. When poor drainage exists, too much moisture saturates the soil underneath the foundations, causing it to settle and compact, which can contribute to foundational movement.

The type of soil that foundations are built upon plays a key role in how likely a foundation is to move. Sand is a poor soil to build on, as it offers little consistent support. Soft, crumbly soil can become oversaturated with moisture too easily, and consolidating soil’s tendency to dry and constrict can create gaps below the foundation, which facilitate movement. Clay is another soil type that isn’t good to build on. It expands or shrinks depending on temperature and moisture level, which compromises support and creates conditions for undue pressure and upheaval. Houses are obviously heavy constructs, and the soil must properly compress beneath the house and its foundations.

Flowers, bushes, and trees are things that most homeowners love having around their homes for aesthetic purposes. But bear in mind that all of these things have roots that soak up water, de-moisturizing the soil. In long, dry/hot spells, lack of moisture can cause the soil to shrink. Homeowners who live in heavily wooded areas should be particularly wary, since older trees have larger roots that can extend beneath the foundations and suck up any moisture found there.

Any water that seeps below the slabs in a home’s foundations, whether it’s from a plumbing leak or a flood, creates a situation of excess moisture. This causes the soil to expand and push the slab upward, which can result in moving foundations.