If your home has a crawl space, chances are you’ve heard the term “crawl space encapsulation” but aren’t familiar with what it means or the benefits it offers. ULB-DRY Waterproofing is happy to fill in the blanks. 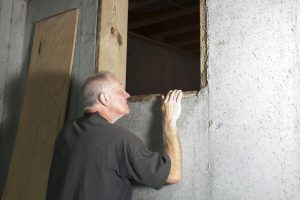 The term “crawl space encapsulation” has been around for more than a century. Interpretations of the term have varied over the years, but the accepted definition of an encapsulated crawl space is one that uses a white vapor barrier to cover the crawl space’s floor and walls, and protect the space from moisture.

An open, non-encapsulated crawl space poses a few problems, the biggest of which is the fact that it’s an uncontrolled environment. This means that the temperature and humidity level can change daily, sometimes hourly, depending on external factors (i.e. weather). By encapsulating your crawl space, you’re gaining control of its environment and thus converting it into an area that benefits your home and family in terms of better health and cleanliness.

Creating an encapsulated crawl space involves installing a durable horizontal vapor barrier on the crawl space “floor”, along with vertical vapor barriers that extend up the foundation walls. These vapor barriers are composed of top-quality polyethylene with a polyester mesh reinforcement. The vertical barriers are sealed (taped) to the horizontal barrier. Everything in the area is also sealed: namely, any supports, as well as plumbing coming through the walls and dirt. Next, a two-sided foundation tape or polyurethane caulk is applied between the crawl space vapor barrier and the foundation wall. This ensures that the moisture under the barrier is sealed. The barrier’s superior materials ensure that it can sustain crawl space traffic without tearing like normal plastic.

No matter what type of home you have or the nature of your foundation, before engaging ULB-DRY Waterproofing for crawl space encapsulation in Kenosha or Skokie it’s a good idea to conduct a radon gas test. Radon gas is a serious, potentially deadly problem that must be dealt with if detected.

Hire ULB-Dry Waterproofing for the Job

The ULB-Dry Waterproofing team has decades of collective experience gained from servicing homes in Kenilworth, Oak Park, Mundelein, and numerous other cities in the Chicago metro area. We’re professionals in every sense of the word – and professionalism is what’s required for a complex job like crawl space encapsulation. With our company doing the work, you’ll avoid missteps such as: