Home
Basement Waterproofing
What are the Negative Effects of a Damp Basement?

What are the Negative Effects of a Damp Basement?

Because they’re underground, basements are much more likely than other rooms of being inundated with moisture. Whether 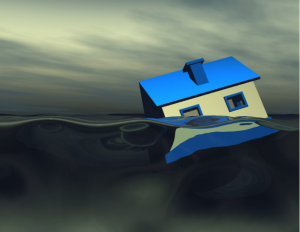 that moisture comes from flooding, or just from general seepage, it can wreak havoc on a basement.

For this reason, it’s wise to take measures which will prevent water from making its way into your basement.

But why should you take these measures? What are the negative effects of a damp basement? Let’s review this, shall we?

You see, dust mites feed on moisture. The more moisture that makes its way into your basement, the more dust you’re going to have to deal with. This not only causes an annoyance, it also drastically reduces the aesthetic of your basement interior.

By properly waterproofing your basement, you can, for the most part, keep dust mites at bay.

You’re probably well-aware of the musty odors that will emit from your clothes after they’ve been left wet for a decent amount of time. Your basement is no different. The longer your basement remains moist, the mustier it will smell.

Eventually, if moisture is not reduced in the basement, it will allow for the growth of mold. Mold in and of itself also emits a foul odor.

In essence, if you allow water and moisture to get comfortable in your basement, your basement will eventually start to smell foul.

As was just described above, if water is allowed to remain in your basement for a prolonged period of time, mold will eventually start to grow. There are a great number of mold species which thrive in moisture and humidity.

And if you allow moisture to remain in your basement after mold has appeared? That mold is only going to get worse, growing not only thicker, but to further and further reaching areas.

You don’t want mold to build up in your basement. It not only looks bad, it carries with it a number of negative health effects as well.

The faster you can remove moisture from your basement, the more you can preserve its structural integrity.

Like we said, moisture on wood leads to warping. Therefore, moisture on a wood doorway will lead to a misshapen doorway.

Once a doorway has become misshapen, it can be almost impossible to open and shut entirely.

Have Your Damp Basement Professionally Waterproofed

Are you looking to avoid the negative effects of a damp basement? If so, you’ll be best-served by having your basement professionally waterproofed. If you live in Chicago, ULB-Dry Waterproofing can help you.

With an A+ rating from the Better Business Bureau, we’ve got over 25 years of experience on our side. We know everything there is to know about waterproofing basements.